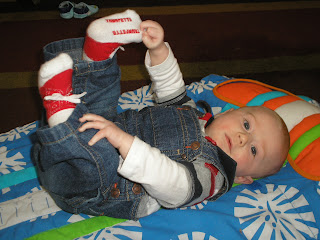 Thank goodness for Tylenol. Joseph got half of his 4 month shots yesterday (he got the other half at his 4 month visit), and had a rough reaction. His leg still seems sore and he's trying to sleep the rest of it off.

When he hasn't been whining lately (because of either his cold or shots), he's been terribly entertaining. He found his feet last week. And, he's figured out that he can control his voice. So, he's been singing to himself and taking his socks off. He seems to be close to rolling over, but it's hard to tell. He's getting up on a side, but gets stuck on his arm. He'll get there, I'm sure.
And, we finally installed the webcam that we bought last year. So, we Skyped (is that a word?) Matt's family and got to see everyone. Pretty cool! It was too bad that Joseph had to go to bed before Grandpa got there for dinner, but we'll catch him soon, I'm sure.
Posted by Allison at 11:05 AM