While I can get it

Joseph's asleep, Matt's gone racin' boys (boogity, boogity, boogity), the house is clean (enough), and I'm less than uninterested in the pile of papers that I have to grade. So, here I go:
Let's start with the photo update.
While Matt's folks were here over Labor Day weekend, we went through the butterfly exhibit at the Museum of Science in Boston. A beautifully huge monarch had gotten comfy on Joseph's head while I was talking nerdy stuff with a guide. I managed to capture this stunning image of the event. Please notice the adults behind him admiring the cute boy with the butterfly on his head while the boy seems to be wondering "what the hell is going on?". 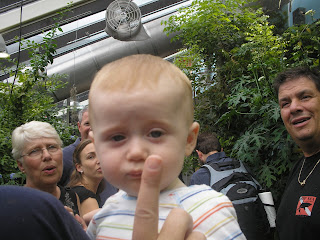 I need a faster camera. Now, he's not quite crawling yet. But, he is managing to scoot around using his own hybrid form of movement...some flopping on his stomach, some reaching really far with his arms, some pushing himself backwards. A lot of pushing himself backwards, actually. And, a little bit of reaching for things above him. He managed to score a bag of Veggie Straws from the coffee table that wasn't quite closed. He was so proud of himself--notice him double-fisting the Veggie Straws. You can't see Staley hovering at the edges stealing one straw at a time...she controlled herself pretty well. 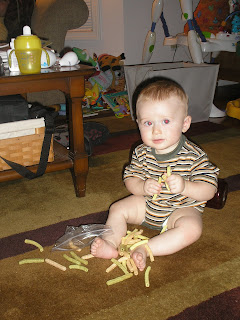 Since we're talking about his movement, this was just the other day. How did I get here, and more importantly, how can I get out? 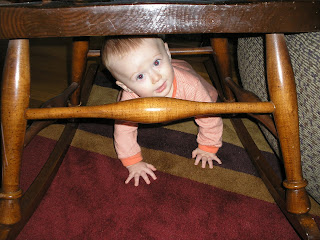 Then, my mom, Joseph, and I met some of her friends from work at this little museum where some monks were creating a sand mandala. We didn't get to see them working on it (because I was slow), but we did get to see the mandala and the other neat stuff that the museum had. So, here's the mandala almost finished: 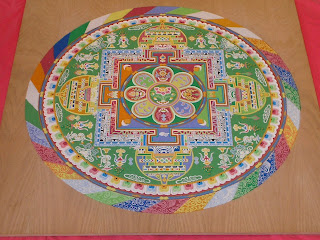 And here's Joseph dressed up like a little Nepal...ese...ian, er, kid from Nepal: 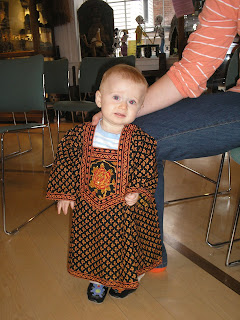 And, finally: when we went in for his 9 month checkup last week the doctor said that he's very close to cutting all 4 of his first teeth (two tops, and two bottoms). That, in conjunction with the low-grade fever that he picked up this week made for a rather unhappy little boy. He's still gaining weight (18 lbs 2 oz), and otherwise looks good, but he's been kind of serious these last few days. 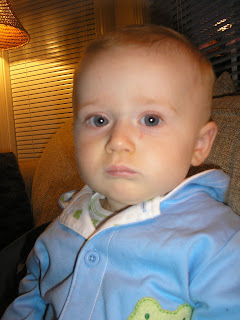 Now, this has been rolling around in my head for a while now and I just kind of want to articulate this. I read a note that my cousin had written on "following the path of God." She seemed to think that following in the path of God meant a life full of suffering, pain, unhappiness, and general difficulty. So, I'm wondering if that is what it means to be a good Christian. I'm making the assumption that if you are a good Christian you are following in the path of God. So, what does that mean? Is it about your choices, your intentions, your silent beliefs, your ministering to others, your personal discipleship? Some of each? I'm bothered by her belief that this brings pain. Yes, Jesus suffered. But...I don't mean to sound crass, here...I'm not Jesus, and didn't He do that so that we could have eternal life? I go to church (a good chunk of the time, anyway), I treat others as I would like to be treated (most of the time, I think), I am using my powers for good (as my mom says): I am using my gifts to help others, I live an honest life (mostly, I think, although I did download some songs from Limewire and we do own some pirated DVDs), and I have given my son to be a child of God. Am I missing something? Really, I'm asking you all, please tell me. I put this out to my students the other day (minus the religiousness of it...more a "what does it mean to be a good person" type thing), and they came up with some interesting (although young, in my perspective) ideas. One said that if you believed that you were making the "right" choices throughout your life that you were automatically a good person. That seemed like a load to me. Another said that as long as your choices weren't taking away someone elses' choices, then you were making acceptable and therefore good choices. Another load, to me. Then we got into where society gets their views on what is right and wrong. We didn't quite get to the point where society has perhaps the most skewed (or un-Christian) perception of right and wrong...but it is a public school and I would like to keep my job.
So, ponder and please respond. I'm interested in others' perspectives. And, the crib is crying, so my time here must be done.
Posted by Allison at 11:05 AM