New Developments and The Moose

So, it's been a little while since I've last posted. Since then, Chompy has cut 2 teeth! My little toothless grin is a thing of the past! Typically kids get the two bottom teeth first, but Joseph got the top two. He did pretty well with them, so hopefully the next ones won't be too bad either. Check him out (those little white nubs are his teeth). 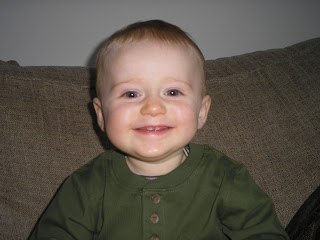 And, I've decided that the fall is, without any question, the greatest time of the year--especially in New England. Look at what I get to see out my front door: 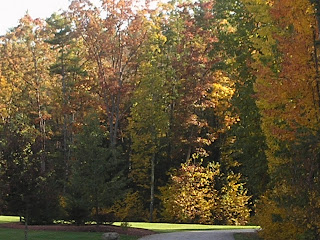 Joseph, Staley and I took in the fall sights and smells of our street with Linus (the blanket). Yeah, I know that the Cubbies lost, but we're ever-hopeful. 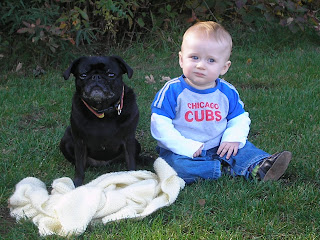 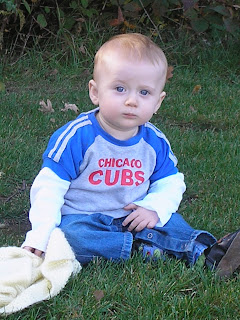 Joseph also figured out how to pull himself up to standing. This was actually the first time that he did it at home. 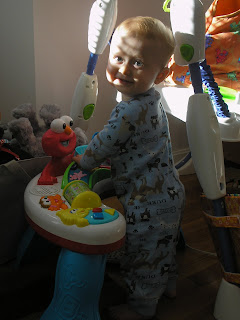 He loves that little Elmo bench thing that his cousins gave him. He takes his time with Sesame Street very seriously: Matt and I say that he's "working." Although, sometimes (most of the time, actually) Elmo makes me want to go screaming through the streets and I've mostly banned him from my home, Joseph really likes this toy. This is the only Elmo that exists in our house and will hopefully remain as such. Other Sesame Street characters are cool, but Elmo just makes me angry...I know that probably sounds cruel and bizarre, but he just has a personality that makes me want to...I don't know...scream. Kids love him, though.
Then I just thought that this picture was kind of cute, so I'm sharing. Little tootsies. 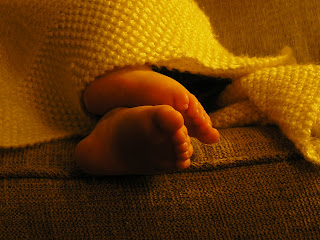 And, I feel like I should mention The Moose.

I don't much know how to explain this other than: my dad won the moose lottery this year. His name was chosen to recieve a permit to hunt a moose this next week. Apparently this is a pretty hot commodity in New Hampshire and it's pretty exciting to win. So, my cousin came out here yesterday from Cleveland to go and hunt Cowwinkle (he got a cow permit--no bull) since he has experience with elk and knows how to do the field dressing. Matt went up there today to cook for the two of them and swap out with my dad once they get their moose. My dad doesn't do so well with the blood and guts, and Matt wants to learn to dress the animal to go deer hunting later.
Since my dad won the lottery in July or August, he's been so excited about this whole thing--he's been like a little kid. He got new camouflage and wore it all weekend, he bought new boots on the salesman's recommendation that "these would be good for a moose hunt, because, you know, I pulled a moose tag this year", he bought a new knife because "you know, I pulled a moose tag and I'll need to dress my moose", he got new binoculars (despite his cataracts) because "you know, I pulled a moose tag and I'll have to be able to find it." You get the picture: a total kid at Christmastime. He has even managed to get a Food Saver (that was last year's Christmas present) and all the fixin's (equipment and seasonings) to make a whole lot of sausage. The Sausage Man (yes, that's really the name of the place that sold him all this stuff) even gave him an international orange hat to wear while he's hunting for sausage.
I can't even tell you how much I'm hoping that they get their moose. I hope that it's a short, uneventful, and safe hunt and that the thing gets dressed and out of the woods quickly and with a lot of help. Once it's in the back of the truck I know that we'll all relax a little. So, stay tuned. I hope that it's a boring story...
Posted by Allison at 6:49 PM