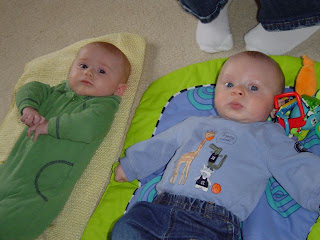 So, we met this really nice couple in our labor class (which I'm not convinced prepared me for labor, btw) whose little boy, Carter, was born on Halloween. We had lunch over at their place last weekend and our little bald boys got to hang out a bit. While I'm still convinced that play dates for babies are more about mom dates, we had a lovely time with them. Carter and Joseph are about the same size, although you can see that Carter is a little bigger. They were so cute! Carter's grandma bought him this horsey jumparoo thing that Joseph got to try out, too. He's not quite tall enough for it yet, but he was interested in all of the rings and stuff that were on it. Perhaps we'll have to take a look at those in a while...it might mean that I can cook dinner! 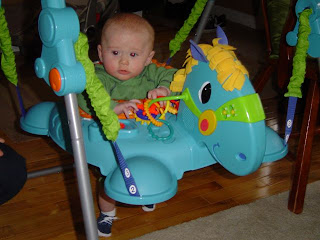 Max and Jackie are home this week too. Max has deemed himself "Uncle Cool" and Jackie "Aunt Awesome." We're going along with that for the time being because I find it rather amusing :) We've been having a great time visiting with them and will be sad (as usual) when they leave again this weekend. Summer comes soon enough.

Otherwise we're same old, same old around here. I took Joseph for a 3 month picture last week with this lady in Nashua who was recommended to us. She took some AMAZING pictures. For all of the lousy red-eyed looking-the-other-way missed-the-smile-again pictures that I've taken, she took at least that many sweet little boy pictures. So, we got sucked into that. They do this package deal where you can take them in at 3, 6, 9, and 12 months and get this nice panel at the end to show how they've grown. You can check her out if you'd like: Pixel Perfect Photography. If anyone out there goes to her--tell them I sent you!

Speaking of Nashua...I'm so disappointed and saddened by the city. Check out the Nashua Telegraph if you're interested. That's about all I'm going to say about that. Solidarity...whatever.