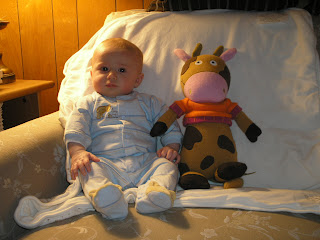 So, I thought that I'd start with a picture. In case you hadn't figured this out, we're taking a picture every month on the 27th with Mona (the cow) to keep track of how Mr. Man (as Matt calls him) is growing and changing. This is 3 months. The couch is different because we were at Grandma and Grandpa Krones's house this month for our photo-op.


We've been rather eventful since my last post. For starters, my mom, Joseph, and I were able to take a lovely vacation during the school break a couple of weeks ago. We drove to Cleveland to visit family friends, Chicago to visit Matt's family, back to Cleveland to visit my dad's family, to Pennsylvania for more family friends, and finally home. Joseph did so well--I was so relieved to learn that he will (hopefully) be an easy travelling man. He'd better get used to time in the car as Matt and I tend to be the marathon-drive-vacation people, and we're still not quite ready to let a baby cramp our style too much (that's a joke). Here's a picture of our day downtown at the Bean, Macy's (Marshall Field's), and the Art Institute. You've got to love that Toddlin' Town! 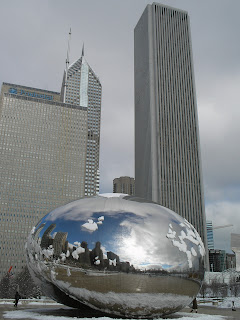 And then, once I got home, we were back to business as usual which means my class on Thursday night. This week brought a whole new adventure as I didn't even make it to school when Matt calls and says, "The baby fell off the couch, do you think he's okay?" "Yes. Did he cry when he fell?" "Yes, but he fell on his head." "Is he awake?" "Yes." "Is he bleeding?" "No." "Is he throwing up?" "No." "Are his eyes all dialted and screwed up?" "No." "I'm sure that he's fine, but call the doctor if you want to." "Okay." So, I go to school and get stuff set up. Phone rings "I called the doctor and they said that he's probably fine, but they want me to come in anyway. So, we've got an appointment at 7:30 tonight." "Okay, let me know how it goes." So, I teach my class. 8:15 and the phone rings "Doctor says that he's probably fine but they want to do a CAT scan just to make sure that he doesn't have any bleeding in his brain." "Are you serious?" "Yeah, they say that they kind of have to order that for head trauma in kids under 2 since they don't communicate so well." "Okay." "So, I'm on my way to the hospital." "Okay, I'll wrap up here early and meet you there." So...here we go! 3 months old and we're going for Baby's First CAT scan. I was rather proud of myself for not totally freaking out. After some deliberation on the "do we want to nuke our 3 month old's brain?" discussion, we decided that we'd rather be safe than sorry and that we had insurance for a reason. Long story short: he's fine. I felt so bad for Matt, but he learned that he's not a gooey little newborn anymore and requires a bit more attention. The tech at the hospital says that it's always the dads bringing the babies in because mom left them home alone, and dad turned around for "just a minute" and baby ends up screaming on the floor. Hopefully we can make it more than 3 months until our next hospital visit.