I shouldn't be allowed to read things on the internet. Now I'm all concerned that Joseph has reflux. He spits up. He's been kind of fussy at food-time lately. He arches his back sometimes. He's kind of skinny. And he sucks on his hands and rags. Coincidentally, these are all symptoms of reflux. Aren't they "symptoms" of being a baby too? Oh well.

Here's our 5 month picture with Mona the cow, for those of you keeping tabs on our growing boy. 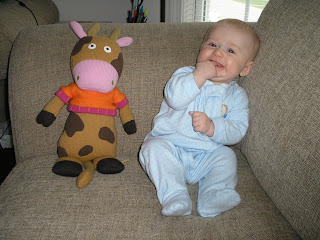 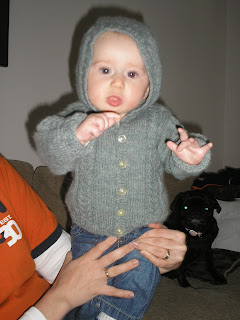 In other news: I finished my first sweater! I'm so proud :) Too bad that it won't get too much use. I'll just have to make another one...much bigger... 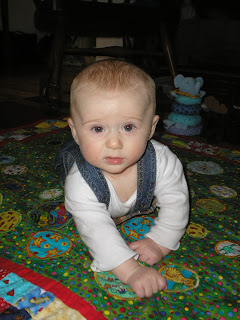 We're rolling too. We've had about 5 or 6 successful flips from front to back. It seems that he's figuring out that he's controlling this, too. He always looks surprised when he ends up on his back. Sometimes he looks like Elvis before he rolls over :)

My poor mom's flight from Beijing was cancelled today because the plane was having wing flap issues. She hates flying so much and I know that she's a little bothered by this (that would be an understatement). She should be home tomorrow, though. I can't wait to hear about her trip!

Good luck with exams this week, Max and Jackie! Study hard and be wicked smaht like I know that you both are. We can't wait to see you both soon!