With teaching, it's often easier to drag your sorry sick butt through a day than be out sick. You've got to decide to be sick often before you are actually sure that you're sick. So, I decided last night around 7 that I was still sick today. When I woke up this morning to get Joseph ready, I decided that I probably could've gone in today. But, I'd already made plans to be sick, so back to bed I went!
So, I feel so much better. I can breathe. I can eat (and taste). My throat doesn't hurt, except when I cough. And my headache is down to a dull pulse that I can totally live with. My congestion has migrated to my chest so that I periodically hock up absolute grossness, but it's better! Yeah!
But, for some reason, Joseph had a terrible night last night and I really don't know why. He woke up screaming (he usually wakes up fussing) around 11:30 and didn't settle again until after 12:30, and then had a repeat performance between 2 and 3. He seemed to be gassy, which seemed to be hurting him. I mixed his cereal with some rice milk last night, which I've never done before. So, I guess that probably didn't sit so well with him. I don't know why...there's not much in it...so, we'll see how he rolls. Poor little guy.
And, I've GOT to finish Twilight today. I've got 40 pages left. I decided that I was annoyed with the way that the last situation played out so I didn't finish it last night. Then, I had dreams about vampires. Ridiculous, I know. And, (this gets better) while I was rocking Joseph last night, I found myself wondering how I'd feel if he fell in love with a vampire. I ended up deciding that if she came from a nice "family" like the Cullens, then I'd probably be ok with it, eventually. On another note, I need the next one now...who's got it that I can borrow?
In the meantime, I'm going to try to do some shopping online today for Christmas. I'm still kind of stymied on Joseph...he just had his birthday and got a ton of shiny new toys, and this is his preferred toy box (yeah, Max, that's your old sweater...Mom keeps everything and it's so cute on him!): 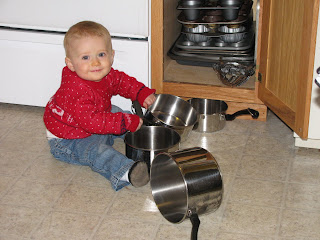 So, I think that we're going to get him fitted for his first walkers from Stride Rite and get those (because a one-year-old needs shoes that cost more than his parents' shoes...). But, otherwise, it's a lean Christmas 'round here. It doesn't bother me, but I have to be careful to not ruin Christmas for the rest of my family.
Posted by Allison at 11:50 AM