Ahh, the newness of fresh snow (and a SNOW DAY!) 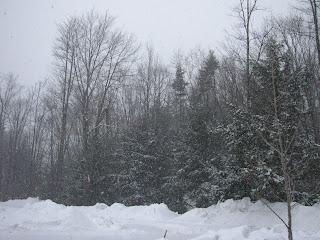 And, somehow I'm reminded of that old Girl Scout song that I think that I've quoted on here before about how you
Get new cars 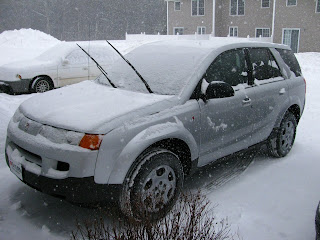 But keep the old 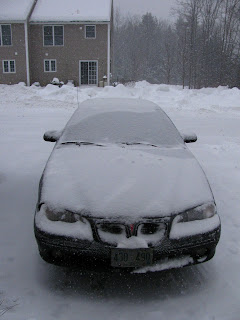 The new one is silver
and the trade-in's blue 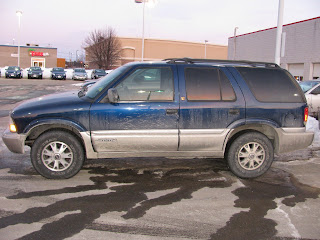 Or something like that...Anyway, Jimmy is gone. We'd had it for 5 years...not long enough, if you ask us. But, it's time had come. It was falling apart. Ask anyone who'd ridden in it lately--it was really one hell of a car. The best thing about Jimmy, if you ask me, was that the little pin that released the key in the ignition after you put it in park had broken. So, you needed either a pen or a screwdriver to get the key out. It was finally getting some character. Although, that character was costing us quite a bit since each character flaw would be at least $350 to repair. We've been scrimping and have managed to find enough in our monthly budget to cover the VUE. It's a 2005 front-wheel-drive 4-cylinder with about 40K miles on it: nothing fancy. But, it's super cute, and I think that I might love it. Although nothing can really compare to my affection for our old standard: my Grand Am (from college!) is almost 11 years old and has 175K miles on it and is running wonderfully (knock on wood), which is why Jimmy got to go to the big car lot in the sky. You're going to have to peel me off of the hood of the Grand Am when it has to go live on a farm...
And, speaking of other new things: Joseph cut his 5th tooth today. It's up on the top, and its partner will be making its appearance soon enough. He's also figured out that he LOVES hot dogs. You know what those things are made of, don't you? It doesn't matter...it's 200 calories of protein and fat and he eats it. He had some meatballs last night and is currently eating a bowl of mac and cheese (one or two noodles at a time). So, I'm figuring that he's growing...a mom can hope, right?
Posted by Allison at 10:07 AM