So, we're on the move. I don't think that I've posted much about Joseph's new-found ability to go places. He's only been crawling for a couple of weeks now, but he's got it down. Check him out:

Isn't he cute? I took that this morning, after his 10 month sitting with Mona: 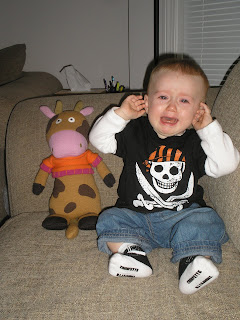 That happy face came from him and his clothes being clean, 6 teeth still on their way in, a cold that's lingered for about a week and a half now, a short nap, a mom who wanted to take a picture of her sweet boy in such a cute outfit, a little boy who's figured out how to get to things that he wants, a little boy who wants mom's camera, and a mom determined to take the picture. Who wins? Not sure yet...we'll let you know.

Anyway, now that he's mobile, I've been finding him in all sorts of interesting places with all kinds of interesting things. I've got "Oh the places you'll go" looping in my head, but Dr. Seuss makes me feel like I'm shopping at Ikea (with ring-dinglers, tartufas, and flarks, or something like that), and that particular Dr. Seuss book is sooooooo over-used that I need a new mantra. "Travelin' Man" (that old song) makes an appearance sometimes, but I'm not crazy about the idea of him having an assortment of ladies all over the world. At any rate, I went to get a cup of coffee in the kitchen and came back to find him here: 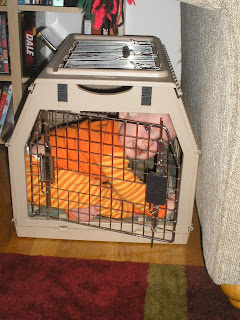 He's seen the dog go in there hundreds of times and figured that he should check it out too. I had to capture that moment. That one will make it in his wedding slide show of embarassing and cute childhood pictures :) Then he just wedged himself here and played with the pet toys: 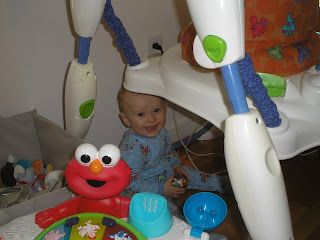 Then we just put this out, because who doesn't love a big old box? Sorry it's blurry...I need a new camera (have I mentioned that?). 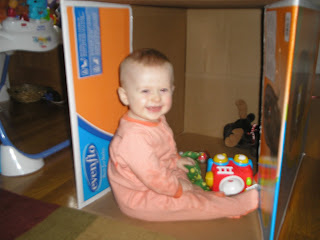 And one picture of the two of us from the wedding that we went to last weekend in Cleveland (that would've come out better if I'd had a better camera). He was such a trouper! It was a marathon weekend of driving out, visiting family, going to the wedding, and driving home, and he did wonderfully. It was a beautiful wedding and he charmed everyone in his little Chinese boy outfit that my mom only told a few people came from an open market in Beijing. 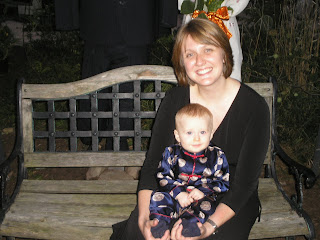 Now, hopefully we'll be able to go to the Deerfield Fair tomorrow if it doesn't get washed away today and if his cough is better...we'll have to see how it all rolls. We'll let you all know, though!