Know that old campy song? I hope I'm not the only one...otherwise I'm crazy. What's the news there, anyway?
So, we've got fleas. Or, hopefully, we had fleas. I really thought that Charley was sick...back pain, not seeming to be muscular, thought we were headed for some kidney problems kind of sick. Dodged a bullet on that one--just fleas. My folks bombed their house because they had fleas. Lela, Max and Jackie's cat, had fleas. It was probably our turn. So, everyone got a flea bath.
Charley: "I swear, bitches, if I were bigger, I'd eat you all. I'm gonna go crap on something as soon as we're finished here. Bitches." 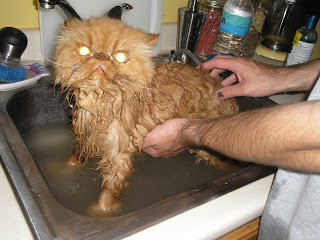 Staley: "I really rather like water, but usually I get a bath in the big tub. Or a lake. But, this is okay too." 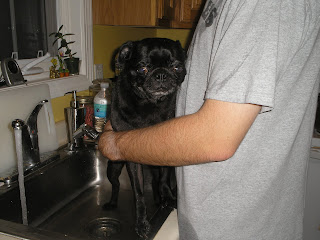 And we vacuumed. And vacuumed. And will continue to vacuum. I really don't want to bomb the house with a crawling baby. So, we'll vacuum.
Otherwise, we're pretty dull and boring this week. We went down to CT to visit some friends yesterday and went to the cutest little Apple Harvest Festival where we ate possibly the best apple fritters that have ever been created. And, they were created by a bunch of Lutherans. Hee hee. I had to chuckle at that one.
Since the Cubbies are out of it now (what the heck...they killed everyone during the regular season and stunk up the place in the playoffs...stupid Billy Goat), we're going to focus on Da Bears. They're really our primary focus anyway...our dog is named Staley and Joseph's bear is named Lovie. 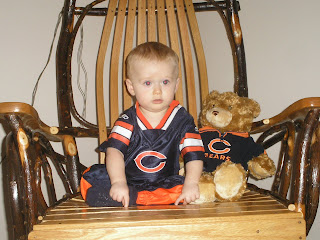 "Can you say 'Da Bears'? 'Ditka.' 'Urlacher.' We'll teach you all about the Monsters of the Midway, Joseph." "I have monsters on my shoes, Daddy. And I'll love whatever you love because I love you." 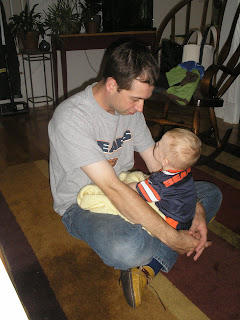